Is running a marathon really dangerous for your health?
120668 Hits

Marathons the last two decades are very succesfull. More and more people are participating either for athletic purposes either for a cause.

Let’s start with the bad news though. For those who believe running makes you healthier there are some rather depressing recent statistics. Last year Ryan Shay, aged 28, running in the US Men’s Olympic Trials in Central Park was the first world class marathon runner to die of a heart attack while competing. One day later Mathew Hardy, 50, died of a heart attack just after finishing the New York City Marathon. A month earlier Chad Schieber, 35, died in the Chicago Marathon although he’d previously been diagnosed with a heart defect.

Then of course, back in 1984, there was the case of Jim Fixx, who is largely accredited with popularizing running with his 1977 book ‘The Complete Book of Running’, who died of a heart attack aged 54 while running near his home in Vermont.Enough to make you hang up your running shoes? Then what about Bhai Fauja Singh? Nicknamed the ‘turbaned tornado’, born in the Punjab in 1911 and now living in East London, he’s 100 years old, a life-long vegetarian who avoids alcohol, fried foods and smoking and weighs only 52 kg and is not only running in international marathons, but consistently winning them in his age group. And he didn’t even start serious competitive running until in his 80s! Kind of contradictory, no?

The good news is that according to medical researchers and statisticians running and other vigorous exercise does in fact lower mortality risks. Their conclusion is if you are informed and run intelligently you should be able to keep going for a long time. However, they also are aware that in general heart disease and attacks increase with age. Exercise is recommended but isn’t a cure.Lifestyle also has an impact and research done back in the 1950s proved that those involved in manual labour had heart attack rates significantly lower than those with desk jobs and even just walking a few miles a week made a difference. 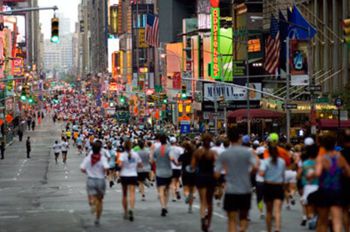 At the other extreme, in more recent research, those running more than 50 miles a week were twice as likely to have heart protective levels of HDL – good cholesterol – and 50% less likely to have high blood pressure than those who ran less than 10 miles a week.So why are relatively young marathon runners dying of heart attacks? According to American heart specialist Paul Thompson MD, a marathon runner himself and in his 60s who has focused on exercise and heart disease, runners in their early 30s who die from heart attacks usually have structural heart defects, as was proved to be the case with Ryan Shey’s death. Whereas, when an over 35 exerciser dies on the run the cause is nearly always artery disease – cholesterol deposits that rupture and provoke a heart attack. So, this doesn’t mean that running caused the deaths, he says. Artery disease was the culprit and running merely the trigger. His advice: ‘Exercise is not a saviour. The risks are low but the benefits are real.

If you want to live a long, vigorous life, you should do an hour of moderate exercise a day.A family requested autopsy after the death of Jim Fixx showed significant blockage in three coronary arteries. Before beginning to run he smoked and weighed well over 200 pounds. His father died at 41 after a first heart attack at 37. Jim Fixx had also had a number of warning signs. Family history is another risk factor and the warning signals aren’t always what you might expect. It could be a pain in either arm or even a feeling like indigestion or just general discomfort according to Paul Thompson. Heart disease is complex and unpredictable. Thompson’s advice: eat mostly vegetarian, consume more fish or fish oil supplement, take a daily baby aspirin (81mg) and perhaps consider a low dose statin to lower cholesterol.

As Jim Fixx said: ‘I don’t know if running adds years to your life, but it definitely adds life to your years.’ Or go ask Bhai Fauja Singh.

How do you feel about this post?
Happy (0)
Love (0)
Surprised (0)
Sad (0)
Angry (0)
Tags:
health running
Prevent gaining weight during the holidays
5 Ways for healthy work launch